From where I stand, Facebook has the morality, or the sad excuse thereof, of a Taliban mullah. I have now been banned for three days for “abusing facebook features” for posting an entirely innocent image, much tamer than many I have seen.

It was the following, funny in my opinion, set-up shot, made in honour of another photographer who shot the same model in a similar shot some years ago: 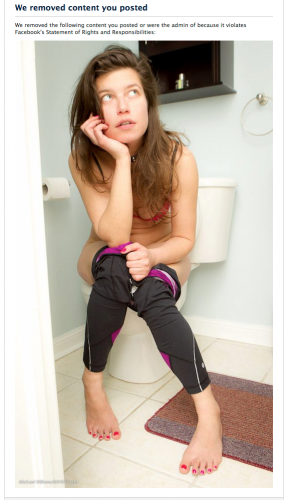 Um, and now, it appears, I am “abusing features”?

It is hard to describe the contempt I feel for these morons.

The only section in there that seems even remotely to offer a reason for the ban is this:

That to me is not nudity – nothing showing. It is definitely not not pornography; it is also certainly not sexual, let alone “inappropriately sexual”. if they think this is sexual, they are sick.

The dictionary I just consulted says that nudity means the state of being nude, which they say means this:

That does not apply here, so I must conclude that Facebook has redefined nudity as “anything remotely hinting that there may be nudity somewhere”. The Taliban, in other words.

So am I being ungrateful to Facebook? They are providing a free service, after all?

“Noblesse oblige”. If you are a monopoly, you have to be careful not to abuse that. You will be held to stricter standards. Facebook will find, one day, that its value is limited by its behaviour.

In the mean time, let me express how sorry I am for my American friends who have to live in a land ruled in part by their equivalent of the Taliban.

And censorship does not work. You can now go look at many more images – and these are NSFW, and do contain nudity – on my Tumblr page, here. Tumblr is not ruled by Taliban.

POST EDIT: Thanks to all my photographer friends from SPS, who have been universally supportive (and annoyed at FB’s prudishness).