There are; and sorry, Paul Simon.

f/18 may not be possible because your flashes may not have enough power. So to figure out what to use, you do this:

Today, for me, with two flashes on each side of the subject, this was f/13. Here’s the setup: 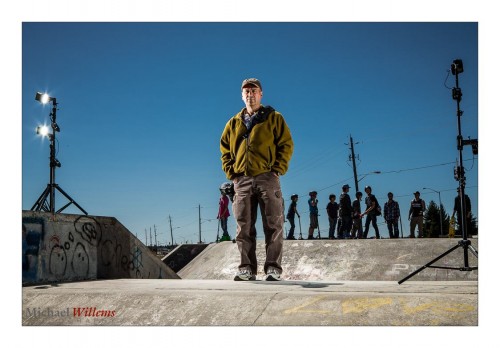 And that gets us: 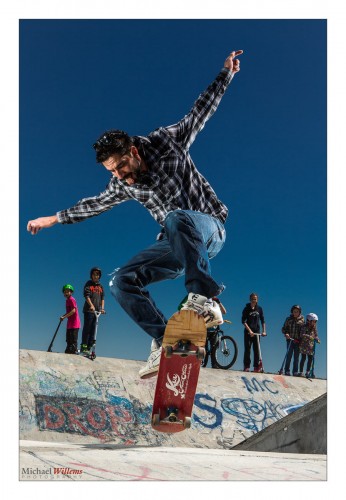 Remember to pre-focus, and then use manual focus; also, go low enough so the subject is high; then, make sure you click when the subject is at the predetermined point. 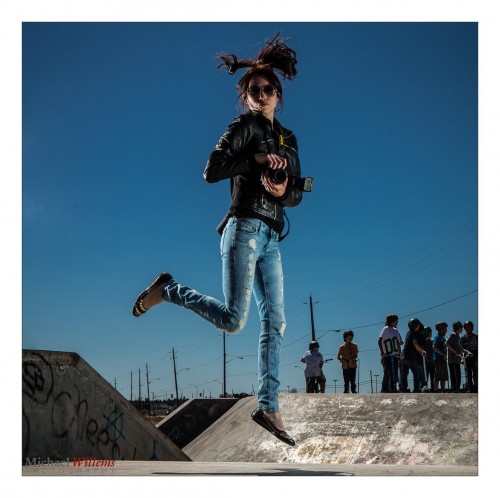 Easy, and I can teach you how to do this, as I taught the Porcupine Camera Club today here in Timmins, Ontario. There must be fifty ways to Use A Speedlight, and especially outside, these are fun!

Even experienced photographers ask me how to use speedlights outdoors. So let me give you one more step-by-step for pics like this: 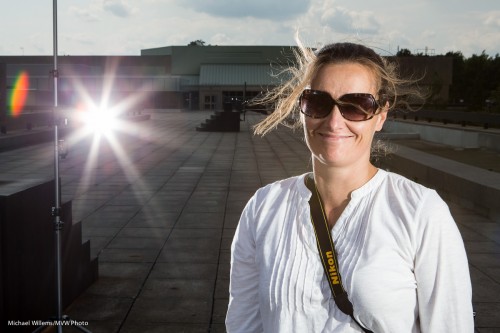 That kind of methodical thinking will get you going quickly.

Typically, on a cloudy day it’s easy; on a sunny day. you will struggle with a speedlight, meaning you need to be close and/or unmodified.

Try it and ask here if you have questions, or do some coaching: I’m here to teach you this stuff quickly.

A reminder for all you speedlighters.

Say you want a shot like this, taken a few days ago,with your Nikon D90 or whatever SLR you have equipped with an external flash (like an SB900): 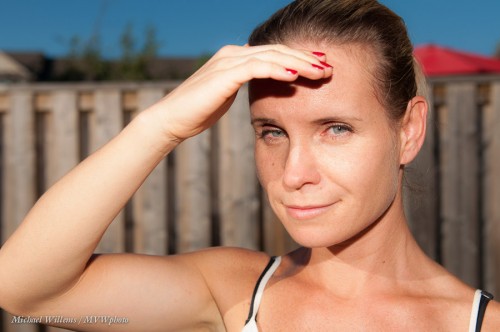 Yes, direct on-camera flash, when used outside and hence mixed with available light, can give you this – not bad eh? And the picture isn’t bad either. 🙂

But look at the background. It is blurry.

That means a large aperture was used (f/5.0 in this case).

But that means the shutter speed must have been very fast – even at low ISO, you need a fast shutter on a sunny day if you want the aperture to be large. I used 1/2500th second.

But hang on. When using flash, you cannot exceed the flash sync speed! Which is 1/200th second on this camera.

So how did I do this? I enabled “fast flash”. (“Auto FP flash” is what Nikon calls it; Canon calls it “High Speed flash”). On a Nikon, go into the flash part of the pencil menu and find flash sync speed, and set to Auto FP. On a Canon flash, indicate the little “H with a lightning symbol”.

Now the flash, whenever you exceed the sync speed, pulses rapidly instead of firing all at once, meaning that you can shoot at fast shutter speeds, where the shutter never fully opens all at once.

The drawback is that most power is lost, so you need to be very close. Aim the flash forward and watch the indicated flash range: as soon as you exceed the sync speed, that range drops rapidly. Stay within that range and you get great outdoors flash pictures!

NOTE: Come join me for a five day workshop at August’s Niagara School of Imaging – it is filling up but there is still space. Act now and spend five days with me on all this stuff, and emerge a flash pro.

My flash/lighting bag as it is today: 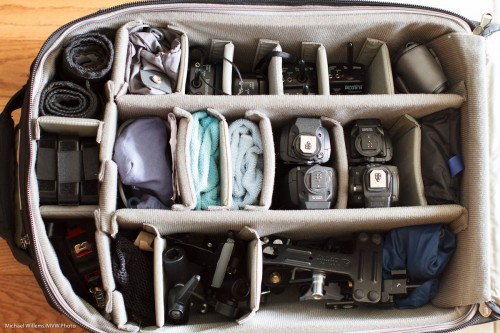 It contains, from top left:

In addition to this I carry another speedlight, more Honl modifiers including the large and small Traveller softbox, a tripod, a bag of light stands and umbrellas, and up to four large lights (Bowens) with a softbox.

Pretty large kit but then, I need to light some pretty unexpected situations, and with this kit I know I can.

I shot a few shots of Kelly, the hair stylist for a shoot the other night. 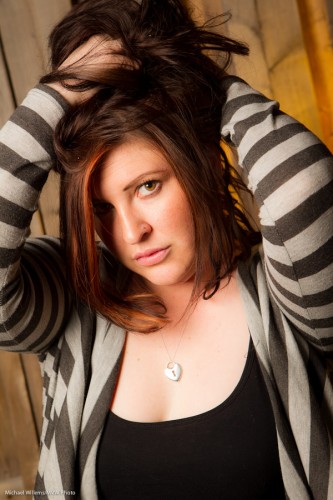 Nice. So how did I light that? 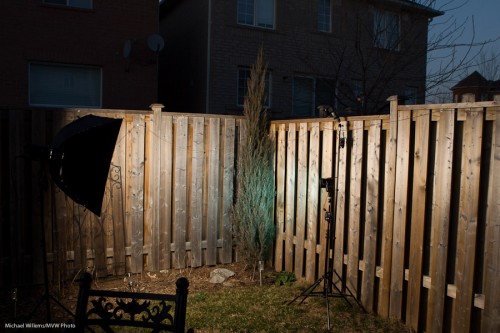 I used my 1D Mk4 camera in manual mode, equipped with a Pocketwizard to drive the following flashes:

The other flash was a spare and I did not use it. I set y exposure for a dark background, then metered the flashes with a light meter. I used the speedlight to light up the background to provide hair separation, since I could not get it in the back aiming forward to light the hair, which I would otherwise have done.

A fairly simple setup for a nice shot, no?

I usually advocate not doing this: 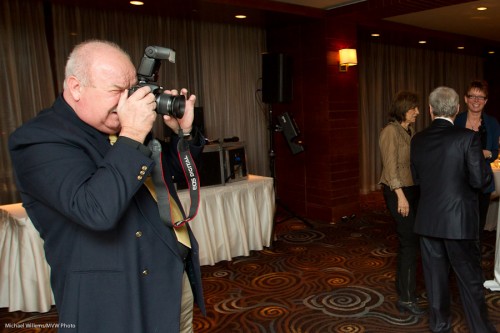 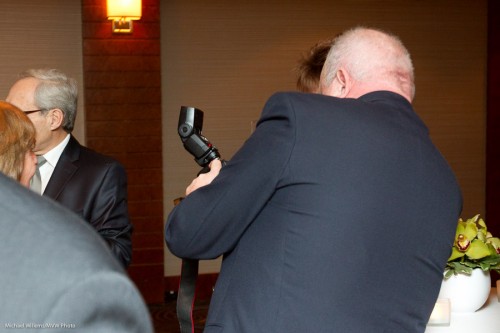 Flash backward, because you want the light to come from 45 degrees above your subject. That’s usually the way, since we usually use wider lenses for people shots, meaning we are close.

However, when you are using a long lens, like a 70-200, then to get to that same 45 degree point, you may have to aim the flash forward 45 degrees.

The problem with this is that with any flash angle that is even slightly forward, some light goes forward, straight from that flash to your subject. So you get this, horrible shadow: 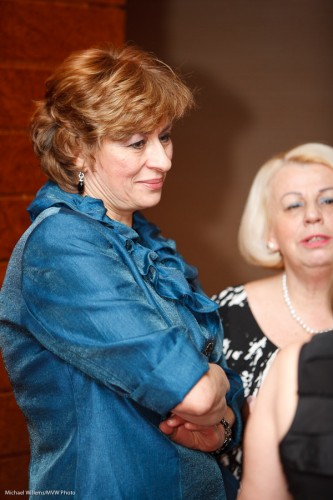 The solution: Flash forward, but use a gobo/card, or even your hand, to shield the inch or two straight in front of your flash. So now the light can still go up to the ceiling, but it can no longer go directly forward to the subject. You could even use a grid but that eats a little more light.

You now get this: 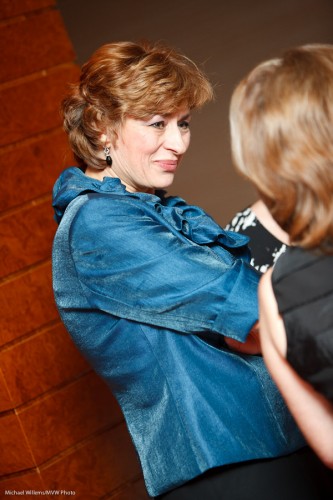 I used my hand here, holding it an inch or two in front of the flash to block the path straight to the subject. Result, a well lit shot!

In a studio setup, we usually use strobes – big, outlet-powered lights. Like the two main lights here, with softbox and umbrella: 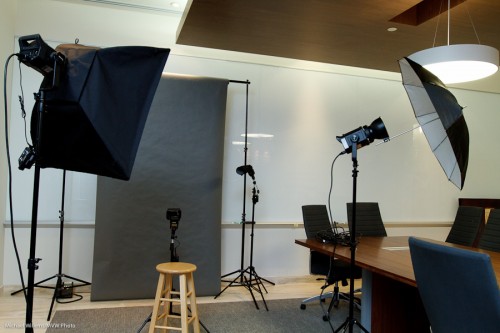 Fired by a pocketwizrds: you can see one on the left.

But if you look carefully, you will also see two speedlights there.

Speedlights? Yes, but fired manually, also via pocketwizards. For which you need a pocketwizard and a cable from www.flashzebra.com for each one.

Why do I small flashes for hairlight and background light?

All of which I use here, and the resulting photos look like this (shot on a 1Ds MkIII with a 70-200mm lens): 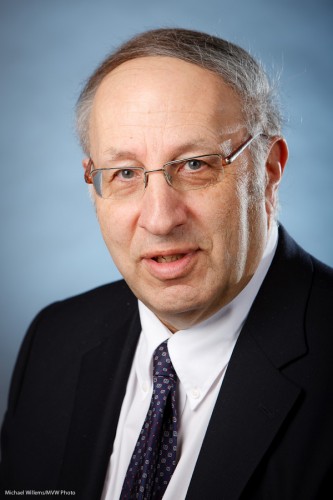 (PS if you are buying those modifiers, and I recommend you do, as a reader of this site you are entitled to use the Honl Photo web order discount code which Dave just made available for you: enter code mvw2011 which gives you 10% off the price!)

Off-camera flash rocks. And all your camera have the ability to take the flash off camera. On a Nikon, or a Cano 60D or 7D, you can use the pop-up fl;ash to drive the external flash. On other Canon cameras you need to use a 580EX flash or an IR controller on the camera.

And here, to motivate you, I shall show you another example or two, all take on Halloween night during a class at Sheridan College:

First, lit from below with a dual-color gelled flash: 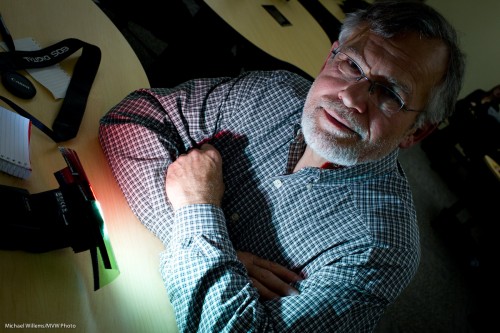 Lit from below, suitable from Halloween: 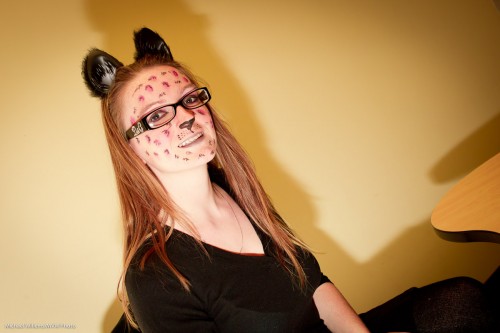 The following photo actually uses one flash on camera, but aimed behind me. Note how I made the image B/W and added grain to give this photo a stark feeling: 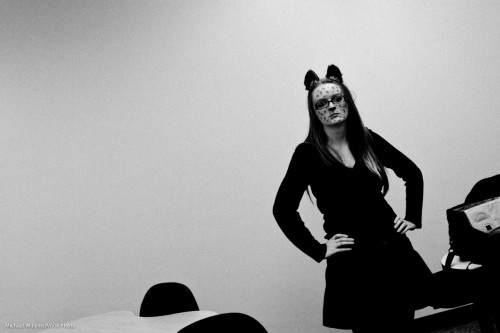 Now a direct flash from our left: 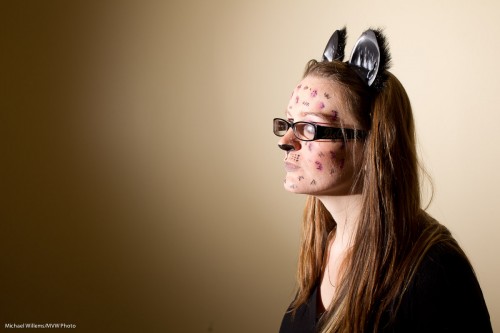 Yes, even direct hard flash is usable, as long as the flash is not in line with the lens!

And here the same but with a grid on the flash, in case you want to avoid hitting the wall with light. (as a side effect, the grid also serves to slightly soften the light): 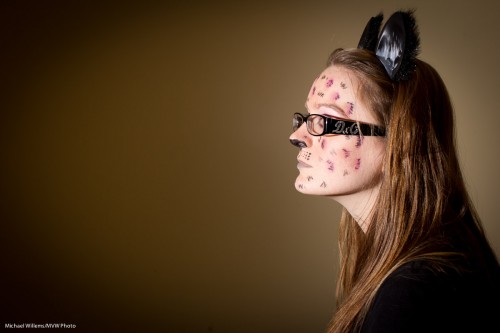 As you see, you can do a lot with a simple flash off camera.

When you shoot a studio portrait, you can use big studio lights – or small speedlights.

Because they are smaller and lighter, I tend to use small speedlights whenever I can.

And that does not mean compromising quality. Take this example. I took this shot of a very nice model and student during a course the other day, using TTL speedlights: 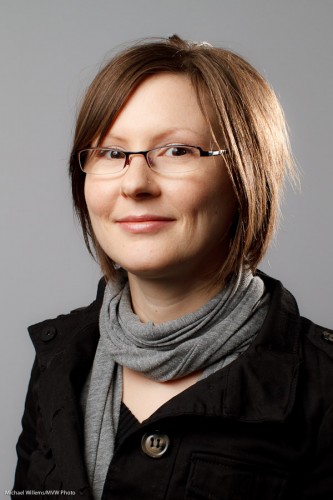 How is this done?

I could have metered and used Pocketwizards and the flashes set to manual, and if I had done many portraits, I would have. But for a quick shot like this, I think TTL is a better way, since it is very quick. Indoors, wireless TTL is a no brainer, and it works:  the on-camera flash, which is only used to direct the slave flashes, can be seen by any flash in the room. On a Nikon, or a Canon 7D or 60D, I need only the camera and its pop-up flash. On any other Canon, I would also need a 580EX flash on the camera, to direct the slaves.

But the portrait above is missing something, no? The background is a bit, well, bland.

So we add one more light, using a grid. And a gel. For the gel, I choose a complimentary colour: complimentary to the hair colour. So for brownish-reddish hair I use a beautiful blue-ish gel. 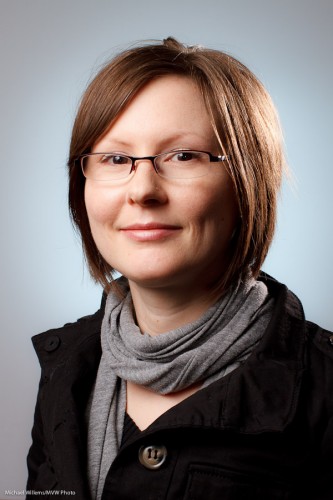 Better, no? Nice portrait, and it took only one light stand, one umbrella, three flashes, one grid, one gel, one 5″ snoot.  All this is affordable, small, light.Professional portraits are now within reach of everyone.

If you take portraits with speedlights you may well need to see where that light goes. Remember last night’s portrait? Here is one last version of that: 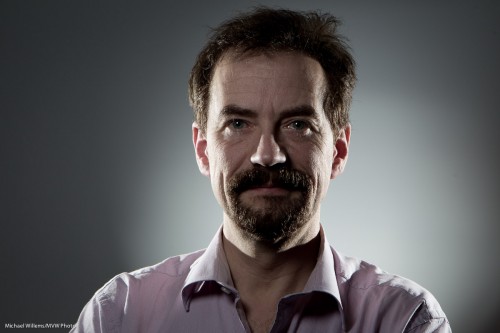 As you see, I have now finished the picture by adding a background light. Another speedlight, with a snoot (the 5″ Honl snoot). The snoot aims light on to one part of the background only.

To see where that area is, you need to fire the flash.

And one good way to do that is to fire a test flash. See that red button on a Canon speedlight? 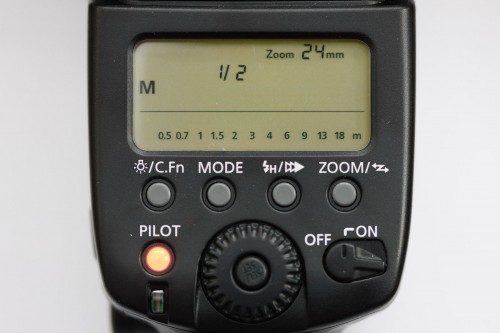 That’s right, button. That red light is not just a red light. It is also a test button. Press it and the flash fires, so you can see where the light will go.