I was going to shoot some waterfall pictures yesterday. Alas: one park (Hilton Falls in Milton, Ontario) had its trails closed because of downed power lines and trees (which I discovered after paying the $14 fee, thanks, Halton Conservation), and the other waterfall, Albion Falls in Hamilton, Ontario, had its access routes closed also, but permanently, because of the danger. I had wide angle pictures in mind, but from above, which is all I could get to, they are not what I wanted, exactly. You will forgive me for that and just look at Albion Falls: 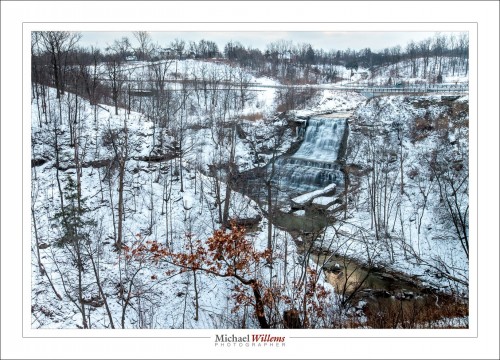 Imagine it is about minus infinity Celsius (a wicked cold wind, plus way below freezing), which is why my companion and I took only a few shots. Groan, that was freezing. I had to stop when my ears froze – literally, I felt ice inside my ear.

Now, the shot. How did I decide on settings?

I wanted a slow shutter, so I started with 100 ISO and f/16. I try to avoid apertures smaller than f/16: any larger f-number and the images tend to get a little less sharp. That would have given me a shutter speed of perhaps around a second at most: not long enough. So I used the variable ND filter, set to a dark setting, to get to 20 seconds.

And on the long lens, the 70-200, I used a polarizer, since it is all I had. That cut almost two stops from teh light, so I got to 5 seconds. Here’s one taken with that long lens: 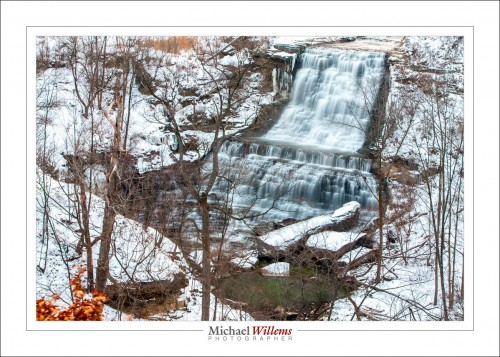 What do you need to watch out for when doing these shots: Mainly, motion.

So of my ten pictures, three were good and sharp. Which is about what I had hoped for. Keep this in mind when shooting waterfall pictures!

And finally, here is a model shot at the same waterfall, from 2012. Just so you seee Canada is not always cold. 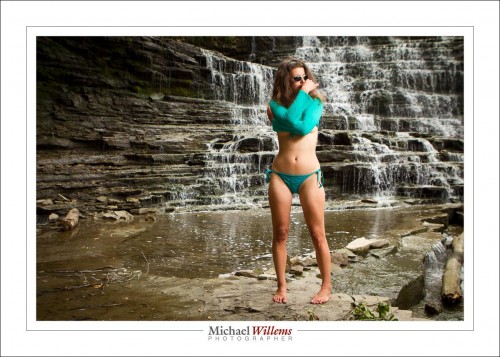 I cannot wait until it is summer again.

Camera technique? Composition? Flash techniques? Specific situations?  I explain it all in my e-books. PDF files for viewing on computer, phone or tablet. Get them here.