Why do we like prime (non-zoom) lenses? Like the 35mm f/1.4 Canon lens I used for today’s snaps of the granddaughter, who is almost two? Because they rock, that’s why. 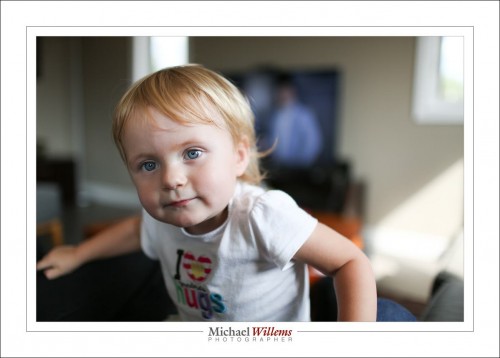 With a prime lens you get:

Today’s shots? Simple snaps. Taken in Aperture Priority mode because I had less than a second to shoot. Although I generally shoot in manual exposure mode, there’s always the exception, and this was it. 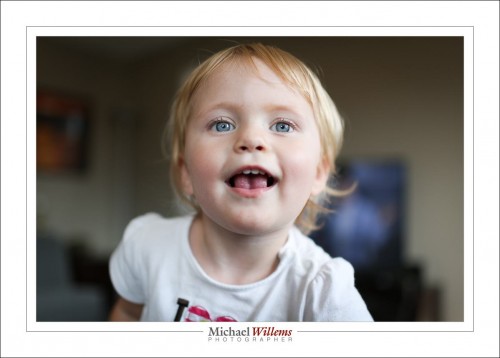 I was in “One Shot” AF mode (“AF-S”, in Nikon terms), which works fine if you are quick, even with a moving baby. Yes. I could have used “AI Servo” (“AF-C” for Nikon users), but again, there was no time. Seize the moment!

What is important is that I focused (with the focus button on the back of the camera, rather than the shutter button) really quickly. Using one focus point, aimed at, you guessed it, the child’s eyes.

The sequence: Aim at eye—Focus on eye—Recompose—Shoot. And all this within a tenth of a second, because almost-two-year-olds do not sit or stand still. Sounds difficult? It is, but with a little practice you can do it.

So at f/1.4 I got two big advantages. First, the large aperture results in a nice fast shutter speed, so there is no motion blur, and there is no need to raise ISO, so I get great quality. Second, the large aperture gives me a super blurry background, which is great, because since this was in a living room rather than a studio, the background was messy. Blur it out and it doesn’t matter; and the subject stands out from the background too. A win-win-win. 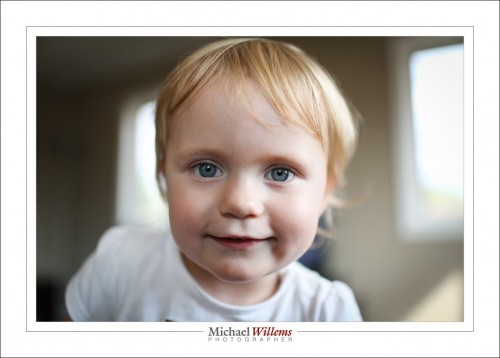 Just remember: focus quickly, and make sure the eyes are sharp. The rest is optional, pretty much.

And then you can concentrate on what is important. The baby. Not the f-numbers, the focus points, the lens’s bokeh quality, or other technical properties of your equipment. Those are just tools. The child and the moment are what it’s all about.

Depict your life. You have just one, and it’s great if you can make a record of the things you do and see.  Years from now, my granddaughter will be happy to have good pictures of herself as a young child.