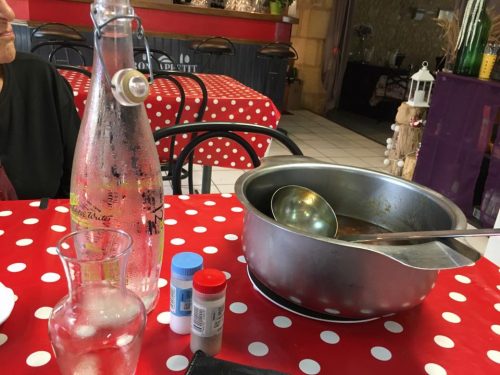 TRAVEL THOUGHTS — I am just sitting down after an uneventful 11 hour drive back from the Dordogne to the Netherlands. Wake up in Bergerac; go to sleep just outside Gouda. And this trip reminded me of a few things; primarily why, as a “third culture kid”, I like travel so much.

Also this. I loved lunch in a small French village, where it is *assumed* that on a weekday you will have an apéritif before lunch (and wine with lunch). And where the Onion Soup pan is left on the table so you can help yourself. God give that France never becomes like the rest of the world, please.

Also, I was able to drive all day at 130 km/h. In all these countries the maximum speed is 120 or 130 km/h. (Ask me why I get speeding tickets in Ontario, which has the lowest top speeds in the developed world. Absurd, and no surprise no-one sticks to that maximum of 100 m/h, 62 mph, in a province larger than Europe. And they act so holy, like 120 is “so dangerous it is not allowed anywhere in Canada”. Fuck off!).

Also, I see how France *is* changing. Nothing like the highways to see what is happening in a country. France is being dragged (willy-nilly, I presume) into the globalized economy: one “logistics” truck and advert after another. And wow, trucks from Poland, Lithuania, Portugal, you name it. All very international. Join, or be left behind.

And I muse over how I will never go back to the UK. Example: all European cars have a small blue “Europe” part of their license plate, where they show the European flag and their country designator (“F” for France, “B” for Belgium, etc). Only the British cars overwhelmingly do *not* do this. If there is ONE thing I hate in life, it is people who think they are superior due to their stupid nationality, and the Brits are foremost in that list. Have been since the “empire”. Screw that, and end up in isolation, Brexit idiots: I will *never* go back to the country where I spent my formative years – unless they pay me.