Okay… I am all set for tonight’s Art Council event. A grand ballroom full of people, and a number of artists (namely, a few members and the finalists, me included) set up to display some work. Here’s mine: 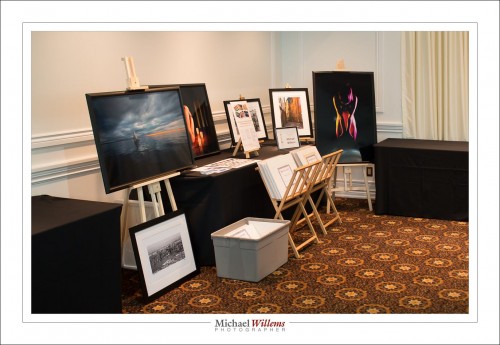 On a different note: a reader asked me a few questions about macro lenses, and I thought I might repeat them here:

Macro lenses come in a variety of lengths from the 45mm range to the 200mm range. Ken Rockwell (The more time I spend in your class, the lower my opinion of Ken Rockwell… although he has some reasonable resources on Nikon equipment) is of the opinion that anything below about the 100mm range is more or less useless.  His argument being that you don’t really want to get close to your subject.
… Forgive me, but isn’t a macro lens designed for the express purpose of getting close?  May as well just use a normal lens if you don’t want to get close, yes?

Good question. Well – first, a macro lens isn’t really about “how close you get”, but it is more about “how large the object will appear on your sensor”. If I could get an object to look huge from a ten meter distance, that would suit me fine, too. Well, that is exaggerated, but you get my point.

A true macro lens has a ratio of 1:1 (or conceivably more). Meaning that at its “closest” extreme, the object appears the same size on your sensor as it is in life. A 2cm long bee would throw an image of 2cm onto your sensor. (A “macro featured zoom”” typically has a 1:4 ratio: it is not a true zoom. The 2cm bee would be a 0.5cm image on your sensor.

Forget Mr. Rockwell for a moment. Let me approach my question another way.
Amongst my other hobbies,  I am an ‘N’ scale model railroader.  If this means nothing, I can clarify a little bit by saying that in ‘N’ scale  1/16th of an inch is roughly equivalent to 1 foot in real life.  A locomotive that’s 80ft long in real life, is 5″ long in ‘N’ scale.
Lets say I want to take a picture of my layout, as if it were “real life”.  I want to get lots of depth in the picture… lets say a near head-on shot looking down the side of the train as it rolls around a curve… Would I not then want a wide angle macro lens? So that I could focus as if I were only a 1/2″ (6ft) tall man with a camera that’s only 1/32″ (6in) square standing 5″ (80ft) from the train?

Yes. The length of the lens you like is determined by all sorts of factors. Do you want to be close? You probably do. But someone shooting bees doesn’t, for fear of disturbing said bee (or of getting stung). Also, keep in mind that a 60mm macro, used on a crop camera, would be like a 100mm macro. And keep in mind that a wide lens will have greater depth of field (depending on its position). I think saying “short macro lenses are useless” is not a very nuanced statement.

And in your case, I think you are probably right about your needing a wide macro lens. But I would have to see your setup. You might also want to (or even need to) consider a tilt-shift lens, at least for the larger “overview”-type shots. Tilt-shift lenses (see previous post) can shift the focal plane, giving you great depth of field at large apertures.

As said, I would have to see. One good thing you can do is rent a lens – or perhaps a few lenses – and see what you get. I fear you will end up with several lenses, since an “I am there” shot is very different from an overview shot.

One more thing. Shoot at small apertures, meaning slow shots, so you use a tripod. If you want the train to be zooming through the picture, slow it down so it looks like it’s zooming in a 6 second exposure, while in fact it was crawling.