I was interviewed this morning by “Frontaal Naakt”, a leading Dutch opinion blog. The editor, Peter Breedveld, will publish the interview in the next days. In the mean time, some of my work is used as illustrations to his other articles: 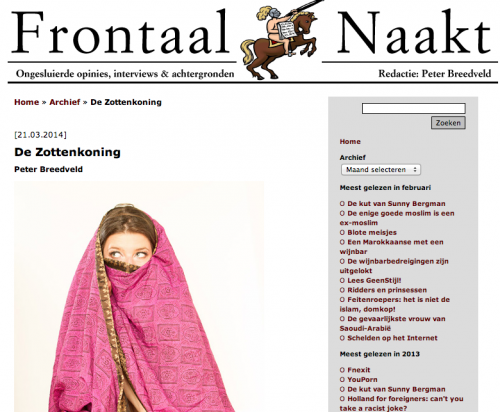 One of the questions in the interview was about societal acceptance of nudes. Which, as most of my readers know, are among the many things I shoot.

I told him that in North America there is serious resistance to nudity, and that we, um, kind of missed the 1960s here. Does that sound extreme? Not to me. The Netherlands had full frontal male and female nudity on prime time TV by the 1960s and 1970s. Here, this may perhaps happen eventually, but we certainly are not there yet.

That said, young people in North America are much less prone to having body or nudity hangups than older people. In The Netherlands, however, mr Breedveld tells me, it is the other way around. The pendulum swings everywhere, always. Right now, that is encouraging to me here, and discouraging there, because as a child of the 1960s I cannot understand what anyone would have against the human body; and I certainly cannot see how they would wish to impose those views on others. Those views to me seem Victorian—but to each his or her own.

The other subject was “subjects”. Are all my subjects pretty young women?

No. I shoot people of all shapes, walks of life, and ages—but I will only publish them with permission, obviously, so they are less available. But I do love photographing all manner of people: everyone is interesting. You’ll see a few there I expect. “Selfies”, too. Why not? If I say nudes are OK, why should I not want to shoot myself that way? I could not ask my models to do something I would not do myself.

Am I an activist? In a way, yes. I would like society to ease up a little bit on the Victorian values, and start realizing that there is nothing wrong with human bodies. Once you realise that, there’s a lot of freedom, and we all like freedom. Right?

Anyway: anyone who likes my nudes can see them on tumblr (my blog name there is mvwphoto). I would say “NSFW”, but I personally believe this is perfectly suitable for work!