Look at Mau the cat, who is pretending to not notice me: 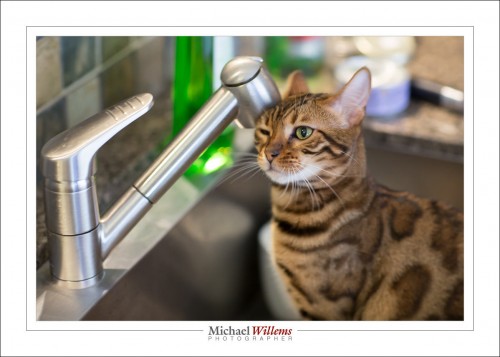 Let’s think about that for a minute. 1/60 sec is about the slowest speed I can hand-hold: any slower and I would shake; and the cat would move visibly also. So that’s a given.

800 ISO is nice. Much more, and I start getting visible grain, certainly on cheaper cameras.

So unless I want to use a flash, f/2 in my kitchen is what I need.

So with the cheaper “consumer” lens zoomed in, I need to go to 6400 ISO. Which would, especially on smaller cameras, give me a lot of grain; a bad quality picture, in other words.

So the more expensive, “faster”, lens gives me a huge benefit here. One not to be scoffed at, which is why we like prime lenses. Which are not all expensive: you can get a 50mm f/1.8 lens for just over $100.

Which I hope you have done!