Since it is winter, I thought it might be a good idea to give you a quick recipe for a winter sport a lot of you (and not only the Canadians!) play, or shoot when your kids play.

That is, of course, hockey. (“Ice hockey”, for my European readers). 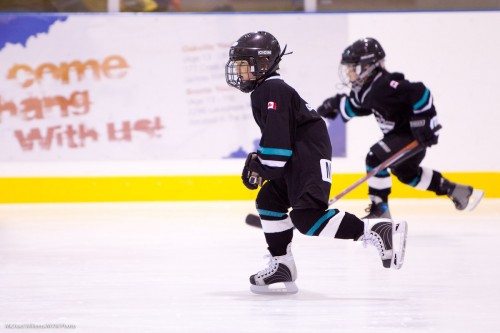 A hockey arena is quite bright.

Perhaps. But in your images, you need it to be really white, which means longer exposures. While to stop motion, you need shutter speeds to be fast. Which pulls you the other way.

In the latter case, you will have to work harder to get enough sharp images.

In both cases, of course, these are starting points. You may well find that your particular arena is darker, or even lighter. Look at the histogram to ascertain which it is – the ice should show as a large peak on the very right side of the histogram, just shy of the right edge.

POSTSCRIPT: an anonymous user said, and I paraphrase: “White balance should be according to the temperature of the light which varies from arena to arena. Custom white balance off of the ice or better yet the referee’s jersey. Also; 1/100? They better skate super slow… Even 1/400 is a bit on the slow side. Crank up your ASA: Your mark-IV can go higher than 1600. Finally; try and get the puck in the picture.”

Read carefully, please: those are starting points, anonymous user. Of course you can accurately white balance off the ice, as I have pointed out here repeatedly in the past, and of course when you shoot, you shoot action, puck, wipeouts, emotion, and so on. But fluorescent WB is usually very close, and for parents, a picture of their child is better than a picture of someone else’s kid who has  the puck.

And finally, yes, my 1D can go to very high ISO – but I do not need to: I have an f/2.8 lens. Parents with an f/5.6 consumer lens, however, will often have a consumer camera, hence will be stuck at 1600 maximum. This therefore will mean something not unlike 1/100th of a second. Not ideal, and it will take many shots to get a few good ones. Compare the two situations: I am making a didactic point, which was perhaps lost on you.

But then – we pay nothing for those extra shots, and if it is all you have, it is what you will have to use. And fortunately, small hockey kids do not skate fast!

2 thoughts on “A very Canadian endeavour”