Consider this image from Aruba, of a rental car inside: 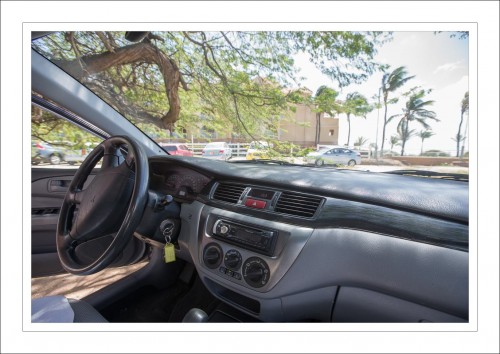 Without a flash, a dynamic range like that is difficult. So look at the before/after:

And so yes, from that image on the left with its very black blacks and blown out whites I can still get back to a reasonable picture—provided I shot in RAW, of course. Here’s my develop settings: 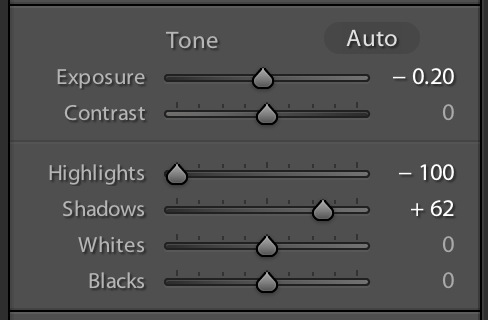 This gives me a sort of one-image HDR.

A student wrote to ask me the following:

Sometimes it is impossible to avoid part of your picture getting over-exposed without your main subject becoming very dark. I didn’t have great improvement with a smaller aperture. What do I have to do in this case?

Good question. A sensor is more like slide film than like negatives: the dynamic range is limited. Meaning you can only show so much difference between lightest and darkest parts of your image.

So when I point at a person in front of a window, they are a silhouette. The aperture makes no difference in this case: not by itself, anyway. But if I increase the exposure (by using  my spot meter, manual mode, or exposure compensation) then they can be correctly exposed, but now the sky behind them is all blown out. Uh oh!

So what can I do?

As usual, there is no single answer. I can (and often do!) the following:

An example of flash outside:

Daniel at the Alamo

There is one other way that sometimes works.

I can shoot RAW and hope there is enough dynamic range to contain detail in the sky; and then adjust afterward, using HDR – High Dynamic Range.

I can do this either in Lightroom, by using “filll light”, “recovery” and other exposure adjustments, or by using specialized HDR software like Photomatix.

Photomatix HDR example from one RAW

The original image (which I took Monday in Toronto’s Distillery District) had a very bright, blown out sky, and the foreground was too dark.

But because I shot RAW, I was lucky and there was enough detail “hidden” in the file, and I was able to bring it out.

This works as follows:

This is no panacea, and HDR (High Dynamic Range) can look gimmicky and unnatural, but when this works, it can help save you from these high contrast situations.

Normally, for HDR you take multiple exposures, of course. But there is so much “extra” information in a RAW file thatyou can get away with this technique quite often.