Today, a few more words about the “real life” Karate Championship shooting I did on Friday and Saturday. 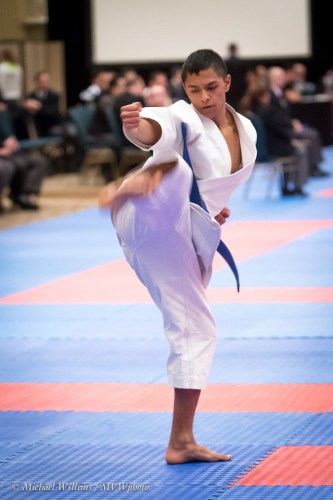 But what were the other challenges, other than the fast lenses and high ISO needed? I ask because while I have pointed out many times that photography is basically simple, it is in meeting the limits, overcoming the problems, that you get to be really good.

One: the dim light also makes focusing unreliable. Even on my 1Dx, I got a lot of incorrectly focused shots. Remedy: shoot more; focus as accurately as you can using cross-point sensors (the centre one, on most cameras, is always cross-point), and focus on cpntrasty areas (the collar, for instance).

Two: the very red nature of the light – about 2,500K in this ballroom, redder than a normal incandescent lightbulb – is not good even when you set the camera to “Tungsten” white balance. So you need to correct it afterward – meaning RAW is best.

Three: RAW is slower, so you lose some shots due to the camera catching up with writing to the memory cards.

Four: the salmon and blue floor mat mean that in every picture, the bottom of the white suits looks either salmon or blue, which makes it look like the white balance is off. It’s not – it’s just the tungsten light reflecting off the floor.

Five: the competitors move unpredictably, so you need to:

Six: in Karate, the subject turns away from you much of the time. The judges are on the other side, so lots pf shots of the subjects’ back. Just be ready to shoot in the few seconds you have, when the subject is looking your way.

Seven: the background is not of your choosing. Do the best you can, and throw it out of focus as much as you are able.

As you see here, there’s quite a lot of real life “working with limitations” going on in a real shoot – not just the basic thinking of “ISO+Aperture+Shutter = Exposure”. 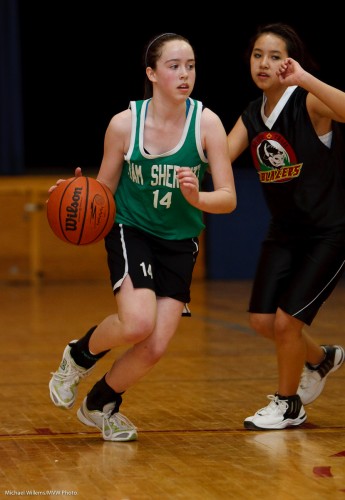 So on warm sunny days, when you shoot summer outdoor sports…. hey wait. It is -23.5 C outside, here in Mono, Ontario.

But yes, I thought this would be a nice time to give you a walk-through of an outside summer sports picture, like this Rugby shot from July 4, 2010: 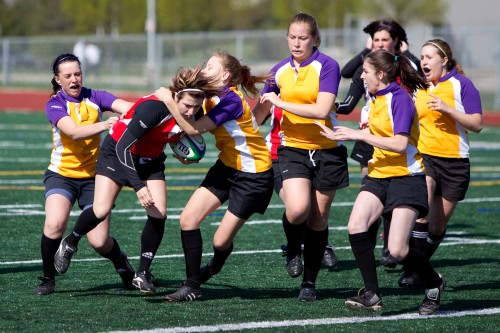 So how do you shoot outdoors sports?

I thought a quick outdoor sports picture would be nice for today’s belated post – I remember sweating on that day.

A distant memory now that it is -23.5 C! Almost time to drive to Scarborough to teach “Travel Photography” at 1pm (there’s space!).

Since I just got back from shooting a junior Lacrosse game, here’s another few quick tips.

And they do not apply just to Lacrosse!

Inspired by yesterday’s Rugby game and tomorrow’s Lacrosse game, both of which I shot/will shoot for newspapers, here’s a little checklist for the 1D Mark IV and similar cameras for sports like this:

As for exposure, the need is for fast shutter speeds. 1/320th or faster.

While there are several ways to achieve that, I do it as follows:

One more tip: shoot the jersey numbers and the roster, so you can write the right cutlines. I was not happy that rugby players do not have the numbers on the front of their Jerseys.

I hope that helps all you budding sports photographers.

I have never shot Rugby before, so I thought I would enjoy this morning’s newspaper shoot, a high school rugby game. And I did.

Here’s a shot. Of course it is one that I did not send to the newspaper, since I only just shot this and the paper is not out yet, and it is bad practice to trump your own customers. Click for larger:

I set the camera to continuous focus (“AI Servo”) and used a custom setting to give preference to tracking, not to refocusing on objects that appear in between. I used one focus point, with expansion to surrounding point.

The camera produced many sharp shots – most of them by far, so I was more than impressed with this first sports shoot with the Mark IV.

But my main learning was about the sport itself. Here’s what I learned:

Oh, and the team in the red jerseys won by a 10-0 margin, so you can see why the others were very determined to stop that ball.

A quick reminder for those of you who shoot action shots: shots where the subject is moving.

For anything where the subject is moving, you may want to:

And finally, do think about how you want to show or freeze motion. It is not a given that all motion must be frozen. A hint of motion blur can show the viewer that something was actually happening, and that they are not staring at a statue.